On Saturday, May 22, it will be 10 years since the EF-5 tornado ripped through Joplin, Missouri, a city located 140 miles nearly straight south of Lee’s Summit.

We are marking this occasion because after the disaster, John Knox Village associates and residents came together to lift up and support the citizens of Joplin and the surrounding communities that were affected by the tornado. In addition to raising money for Joplin Tornado Relief efforts and supporting families displaced by the event, members of the Village’s emergency medical services team took an ambulance and spent several days assisting where they could.

The following is a summary of the week following the 2011 tornado that Dan Rexroth, John Knox Village president and CEO, shared with associates and residents.

This week, the one word that has dominated the news and our thoughts is the WEATHER! What a wacky, weird, weather week. It started Sunday night (May 22) in Joplin. Lt. Governor Peter Kinder, who spoke at the Village the next morning, said it was the worst storm to hit Missouri in modern times. We all watched the devastation with our hearts going out to those who lost loved ones, homes and/or businesses. At times like these, with the tornado hitting so close to home, we instantly ask, “What can we do to help?” I am proud to say the Village has really stepped up. Our EMS associates responded immediately, and we sent an ambulance with three crew members to Joplin. They have been extremely active in search, rescue and transporting of patients. Our crew spent the night in the home of State Representative Bill Lant from Joplin, which was arranged by our State Representative Gary Cross. Neighbor helping neighbor.

I received an e-mail from a physician friend of mine who lives in Joplin. His message said, “I have seen your John Knox Village vehicles and personnel all around Joplin the past few days. We are grateful for your help.” His note meant the world to me, knowing John Knox Village was making a difference in this tragedy. During the Ashley Cooper concert at The Pavilion, a collection was taken and more than $800 was raised and donated to the Salvation Army for relief efforts in Joplin. We have also been in communication with a Jefferson Healthcare Care Center here in Lee’s Summit that is admitting 16 residents from a sister facility in Joplin that was destroyed. These residents are coming to them with no records and no clothes other than what they were wearing. John Knox Village has offered to open the Thrift Shop for them to take whatever they need at no charge.

Finally, we had a potential crisis of our own. As the sirens were blaring and the frightening news reports began coming in, the thought crossed my mind we could soon be on the receiving end of assistance from others. Fortunately, the storm passed, and Lee’s Summit was untouched. But you all responded so beautifully that I wanted to make that the focus of my message this week. After the storm, I toured the Village. I tried to thank as many associates as possible for their excellent response. I know I missed more than I connected with, but they know their responses to this potential disaster were appreciated. I did hear some great stories that I wanted to share.

While walking through the apartment buildings I started talking to an independent living resident. I asked him where he was in the storm. He said he was running errands. While he was at the bank, the sirens sounded, and the bank manager made all the employees and customers go into the vault. He said they finally let him out, so he went to a store to pick up a few items. Apparently, the warning was still in effect, so the store manager made the staff and shoppers go into the cooler. Just a normal shopping day in Lee’s Summit – going from bank vault to store cooler!

At the VCC, an associate with a guitar and a dog arrived just before the alarm sounded. She responded, along with staff and residents, to one of our protected hallways. Once there, she played her guitar, the dog howled, and associates and residents all sang along. The song selections included, “Take Me Home, Country Road” and “Somewhere, Over The Rainbow.” On another unit at the VCC, an associate began telling stories, captivating the whole unit and helping them take their minds off the emergency. Another group played Royals trivia. Being in confined spaces all over campus, for an hour and a half-required creativity. My appreciation especially goes out to those working in our dementia areas. Associates there had to comfort residents who could not understand the situation and needed extra care in hot and stuffy hallways.

We were all a little more on edge with the storm yesterday because of what had just happened in Joplin. There was also a significant threat, probably more so than any storm I remember in my 21 years in Kansas City. Thank you for how you responded yesterday. You can also be proud of how we have responded in Joplin. 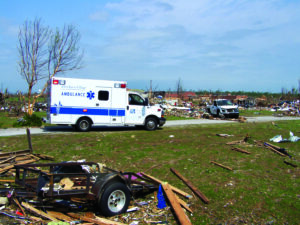 Within hours of the tornado in Joplin, Missouri, emergency crews from across the region, including a team from John Knox Village, began making their way to what was once Joplin’s bustling business district. Upon their arrival, the JKV crew jumped in, transporting injured patients to a hospital in Arkansas, assisting with various search-and-rescue efforts and, finally, relieving the Joplin-based emergency services personnel who continued to work even though their homes, families and friends were in complete disarray. In all, five Village associates, including Brian Opoka, director of public safety, assisted in the tornado recovery efforts.